(BPBD) in Padang Pariaman Regency, West Sumatra, noted that one resident died and two others suffered injuries from floods and landslides that hit the area on Tuesday.

He detailed the disaster that hit the area, which was a landslide that hit a house in Nagari Batu Gadang Kuranji Hulu, Sungai Geringging Sub-district where the landslide material had been cleared by residents.

The landslide caused the death of one person and two people injured. The victims were taken to the local health center.

In addition to landslides, continued flash floods hit the Paingan area, Nagari Kuranji Hilir, Sungai Limau District due to the breakdown of the Batang Paingan embankment.

"As a result of the flood, a number of our residents evacuated," he said.

Floods also hit Sungai Limau Market due to the overflowing of Batang Sungai Limau which paralyzed buying and selling transactions in the market.

"Based on the information obtained, the flood at Sungai Limau Market, it was not because of the embankment was brokendown as before, but because the river water overflowed," he said.

He conveyed that the data was still temporary in nature which was collected by him in the field and guardian of the Nagari.

He appealed to residents in the area to stay away from rivers, cliffs and beaches because rain and strong winds still hit the area.

Meanwhile, one of the residents of Sungai Limau, Heri said the flood depth at Sungai Limau Market reached one meter.

The flood not only harms traders who trade in the market but also makes traffic jams in Padang-Pasaman Barat jam.

Although at around 6:00 p.m. the flood began to recede, but access to the Padang crossing road with West Pasaman was still jammed.

According to him, the current flood is more severe than the previous flood and this is seen by the wider impact of the flood.

Translated by : Internship Student of ANTARA 2019 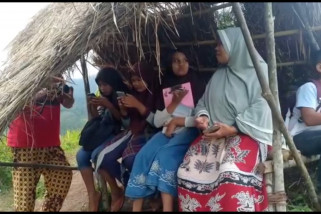