Batusangkar (ANTARA) - A combination of Minangkabau and Malay culture will enliven Festival Pesona Minangkabau 2019 which will be held in Batusangkar, Tanah Datar District, W Sumatra on 4 to 8 December.

"The various Malay cultural arts events or performances include Malay culture in Malaysia, Riau and Bengkulu Provinces," said the Head of Tourism Field of Tanah Datar, Efrison in Batusangkar on Monday.

Not only performances of arts nuanced Malay culture and specific Minangkabau art, there are as many as 16 tourist events will be presented at the 100 Calendars of Event 2019.

Among the festivals that will be held are matrilineal exhibitions, "pacu jawi", colossal dance performances, carnivals, Pagaruyung Expo and the record-breaking of the Indonesian World Record Museum (MURI).

To solve the MURI , he will involve the most "talempong pacik" players participated by students and millennials.

The aim is to introduce and carry on the culture to the younger generation so that it can be sustainable and maintained in the community for generations to come.

"Even though the times are modern, it doesn't mean culture can be forgotten. "Through this festival we make it as a medium or media for cultural preservation," he said.

In addition to preserving cultural values, the event can also promote tourism potential in Tanah Datar and increase tourist visits to the area.

He said he had made the best possible preparations ahead of the event on Wednesday, including preparations for mass dance exercises, forming a committee, and fulfilling supporting facilities.

He invited all residents of Tanah Datar and W Sumatra to come and attend one of the events of the Indonesian Ministry of Tourism in W Sumatra. 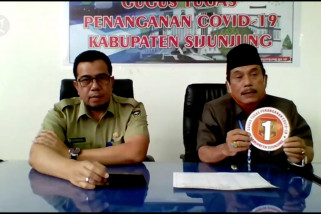