Sawahlunto (ANTARA) - Watching the revitalization of the Kandih tourist area directly welcomes the moment of the Eid holiday, while visiting two new Sumatran tigers brought to the zoo on Monday, Vice Mayor Zohirin Sayuti reviewed the area that was popular as a tourist icon for the Eid holiday at 'Kota Arang' .

The arrival of two Sumatran tigers are targeted to be able to suck up tourist visits. Because from experience so far, many visitors and people have wondered when the Kandih zoo has a tiger.

"Indeed, we continue to do many improvements and additions to animals - including bringing in these Sumatran tigers. All we do is to increase tourist visits back to Kandih. We want Kandih to be crowded again, even to traffic jams visited by tourists, as it once did, when this Kandih was just opened and the visitors' enthusiasm was extraordinary, "Vice Mayor Zohirin said at the Kandih Zoo on Monday.

About the two newly arrived Sumatran tigers, explained by Commissioner of PT. Wahana Wisata Sawahlunto (WWS) Afridarman, is the child of the mother of a tiger who was previously captured by the community in Taratak Bancah Village, Silungkang District.

"So you could say that this tiger has Sawahlunto's blood. Because the male parent comes from Taratak Bancah, while the female parent is from Sijunjung Regency. This tiger was born in the Kinantan zoo, Bukittinggi on May 2, 2017 ago, "he explained.

Furthermore, Afridarman also explained that PT. WWS brought these two tigers with the exchange use system to the Kinantan zoo.

The two tigers have also just been named by the personnel of PT. WWS.

Other readiness made by PT. WWS in fixing the Kandih region has also reached 90 percent. Although, for a number of items there are still those who have not been overtaken.

"In general, from monitoring in H-2 ahead of this Eid holiday we can see Kandih is ready to welcome the tourists. I order the personnel who duty here do not relax the spirit, even though I have seen a lot of work since this pre-holiday, but the real struggle is during the holiday, when visitors come later, "said Zohirin Sayuti.

"This is our moment. We invite people to help promote tourism in our beloved city. Kin and friends who come to Sawahlunto let's we invite to our destinations. , we can also start from us and our families who return to visit these tourist destinations. Believe me, it will greatly affect the glory of tourism again, "he said.

At the end of the review, Commissioner of PT. WWS, Afridarman also reported that a number of games for visitors who had once been inactive could now be re-operated.

"While in the current improvement, we are targeting are clear on the Eid holiday . The game includes; paint ball and flying fox. On Lake Tandikek (still in the Kandih tourist area - red), rides like dragon boats and rowing bikes can also be used by visitors, "he said. (*) 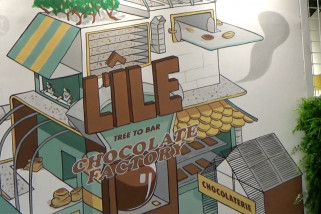