Pulau Punjung (ANTARA) - The Youth, Sports, Tourism and Culture Office of Dharmasraya Regency, West Sumatra recorded the number of hotel and lodging occupancy in the area as many as 5,242 people as of June 2020.

"As many as 5,242 hotel guests were stayed, spread over 12 lodgings," the Head of The Youth, Sports, Tourism and Culture Office of Dharmasraya Regency, Sutan Taufik said on Wednesday.

He added that the lowest level of visits occurred in early March 2020 when a number of restrictions were imposed due to COVID-19.

According to him the condition was a blow to the tourism business world, which indirectly impacts on regional income from the distribution sector of hotels and restaurants.

Meanwhile, the local government recorded that the number of tourist visits to the area in the same period reached 11,740 people, he said.

The most popular destinations for tourists to visit are Situs Candi Padang Roco and Candi Pulau Sawah which are historical traces of the arrival of the troops of one of the great kingdoms on the island of Java, Singasari, "he explained.

He stated that the community's interest in developing tourism potential is quite high, both individually and through tourism awareness groups.

"This can be seen from public uploads in informing the natural beauty of Dharmasraya," he said.

His party projects that 17 destinations will be developed into leading tourist objects in the area, he said. 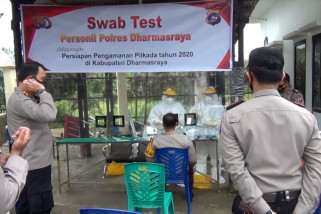