Pulau Punjung (ANTARA) - The Department of Culture, Tourism, Youth and Sports of Dharmasraya Regency, West Sumatra, is targeting dozens of destinations to be developed into leading tourist objects in the area.

"There are at least 17 destinations that we project to be the new tourism, the development is divided into natural, cultural, sports, religious, culinary, and artificial tourism," said the Division Head of the Culture, Tourism, Youth and Sports Office, Benny Mandala Putra at Pulau Punjung, Monday.

He explained that for nature tourism, there are several points in a number of districts that have been mapping the potential and supporting infrastructure if the area is developed.

He gave an example, as in the Lubuk Karak Tourism Village area, IX Koto District, the local government continues to motivate activists who are members of tourism awareness group to develop the economic potential of the tourism sector.

"The main projection is how people around tourist objects and heritage sites of historical civilizations can have awareness in protecting the entire region as a rich cultural history of the Indonesian people," he explained.

He said that in supporting the tourism business in the midst of implementing the new normal, his party continues to socialize the implementation of the standard COVID-19 health protocol for hotel employees and bathing pool managers.

In addition to socialization, his party has also conducted swab tests on around 80 employees in the tourism business in collaboration with the local Health Office.

Meanwhile the local government recorded that the number of tourist visits to the area in the same period reached 11,740 people, he said.

He said the peak of the visit was in line with the Pamalayu Festival activities held by the local government as a series of activities to commemorate the 16th anniversary of Dharmasraya Regency.

"The most popular destinations for tourists to visit are the Padang Roco Temple Site and Pulau Sawah Temple, which are historical traces of the arrival of the troops of one of the great kingdoms in Java, Singasari," he added. 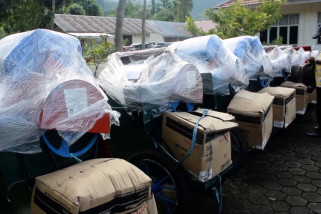