Jakarta, (ANTARA) - The Ministry of Marine Affairs and Fisheries (KKP), through its Coast and Sea Resources Management Office in Padang, has released around 19,937 baby lobsters into Pariaman waters off West Sumatra after police rescued them from smugglers.

"The baby lobsters were alive when rescued, and hence, they were released, in compliance with Ministerial Decree Number 12 of 2020 on the management of lobsters, crabs, and blue crabs," Aryo Hanggono, director general of KKP's Ocean Space Management, said here on Tuesday.

The lobsters were released into Pariaman waters, Pulau Angsa Duo, which is one of the conservation areas prioritized for such action.

On Saturday (May 16, 2020), local police in Jambi had thwarted an attempt by smugglers to ship the baby lobsters to Malaysia through Batam. The lobsters were originally caught from some regions in Java, Lampung, and Bengkulu.

The authorities responded immediately and seized the baby lobsters and released them on Sunday (May 17, 2020).

Minister of Marine Affairs and Fisheries Edhy Prabowo emphasized that baby lobsters can now to be exported within the license regulation that promotes their sustainability as well as fishermen's income.

"We demand the cultivators maintain two percent (of baby lobsters) for rejuvenation in their natural habitat. I think this could preserve their sustainability," Prabowo noted, adding that the baby lobsters can be exported after undertaking this measure.

According to a discussion with lobster experts from Australia's University of Tasmania, baby lobsters have about 70 percent chance of survival in their cultivation habitat, which is higher than their natural habitat. Hence, baby lobster exports would not endanger their population. (*) 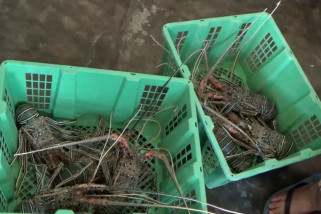