Padang (ANTARA) - The bicycle racing championship wrapped in the Tour de Singkarak (TdS) tourism promotion will be held on 7-15 September 2020 according to the agenda of the International Bicycle Race Federation (UCI).

"Until now, of the 19 districts and cities in W Sumatra, 12 of them said they were ready to participate as hosts," W Sumatra Deputy Governor, Nasrul Abit said in Padang on Monday.

Nasrul regretted that there were fewer regions that wanted to participate in the international scale championship, although he said the reasons given were indeed quite strong.

"Regions that have not yet stated their commitments are constrained by an average budget because many of the mandatory activities that must be held in 2020 include elections of region head," Nasrul said.

However, he hopes that there will be additional areas to host TdS 2020 because from the beginning the aim of the activity was to promote regency / city tourism in W Sumatra.

While related to the discourse of adding hosts from Jambi Province in TdS 2020 from the beginning two districts and cities became four districts / cities.

Regarding the host of the Grand Start and Grand Finish will be determined with indicators of readiness to support program activities, accommodation and supporting events.

Head of Marketing for the W Sumatra Tourism Office, Hendri Agung Indrianto, said that the implementation of TdS 2020 must be more better, especially in terms of the excitement and positive impact on the community.

"The participating districts / cities have agreed to hold more events as a companion and supporter of the 2020 Tour de Singkarak," he said. (*) 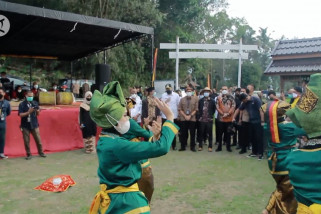