Dharmasraya (ANTARA) - The Ministry of Public Work and Public Housing (PUPR) of the Republic of Indonesia conducted a load test on the Sungai Dareh stayed cable bridge over the Sungai Batang Hari in Dharmasraya Regency, W Sumatra before it is operational.

The Bridge Director Iwan Zakarsi, in Punjung Island, said on Wednesday that the load test for special bridges is the most important part of the road section.

"Must be tested directly to find out the level of security and safety of the bridge," he said.

He said the trial was conducted by the Road and Bridge Tunnel Security Committee (KKJTJ) to obtain the requirements for security and safety eligibility certificates.

For load testing installed at each point of the building a strength testing sensor, and some multi-function detector equipment, he continued.

"We estimate this bridge can withstand loads above 600 tons or reach 1,000 tons, but this cannot be forced to ward off risks or undesirable things, such as damage and also prioritize user safety," he said.

Meanwhile, Head of the Public Relations Division of Dharmasraya, Budi Waluyo said that the stayed cable bridge was built to facilitate the Trans Sumatra route.

In addition, the bridge is also an icon of Dharmasraya and is also expected to be an attraction for local and foreign tourists to visit the area.

"The region benefited a lot from the presence of the first stayed cable bridge in W Sumatra, in addition to moving the economy of the community it also become a place to tour later," he added. 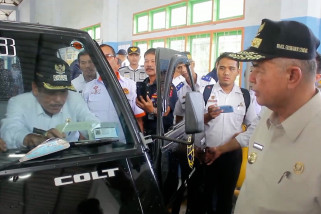