Pariaman (ANTARA) - About 70 students from Malaysia learned martial arts of Minangkabau which is one of the program series,locals cultural introduction to citizens of Negeri Sembilan.

“We go to Pariaman to learn the cultures in Pariaman because it has similarities with Malaysia for example is silat.” One of students from Malaysia, Muhammad Syukran Bin Azma said in Pariaman, on night Friday, March 6.

He said both silat in Malaysia and in W Sumatra were not only used for the propagation of an event but also for martial arts.

According to him silat in W Sumatra is more aggressive than silat in Malaysia so that the student is interested in learning it.

"For us both Malaysian and W Sumatra silat are equally interesting," he said.

"So the basic silat from Datuk Panglima Kumbang which has five streams of Silat Hariamau, one of which is brought to Malaysia, namely balang tigo," he said.

He said based on the history obtained by the silat was brought to Malaysia by Pandeka Gagok, which is the leader of Puti Maninggo or Puti Angin.

Chairperson of Indonesian Youth National Committee, Pariaman said the arrival of dozens of students was a collaboration between his side with the Ministry of Education and the Ministry of Belia and Sukan in Malaysia, that is the Asian Cultural Heritage program.

He said during the collaboration the Malaysian ministry sent students to Pariaman for five days to learn about culture, education and local government.

Therefore, from five days in Pariaman only two days stay at the hotel while the rest are at the homes of foster parents who are scattered in the area.

"During these three days students effectively learn the culture of the citizens of Kota Pariaman," he said.

Each foster parent has different professions ranging from fishermen, farming, trading in the market, to sala lauak traders which are typical snacks of Pariaman. 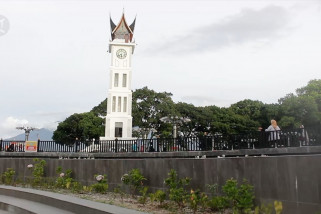