The apology was presented when meeting the governor of W Sumatera, Irwan Prayitno after praying of Zuhur together at Masjid Raya W Sumatra, on Wednesday.

"I apologize for the less sympathetic reception of some of the residents of W Sumatra. They are also apologies for having been troublesome and troubling the people of W Sumatra, "said the governor of W Sumatra, Irwan Prayitno

Meanwhile the tourist's language translator, Robin mentions they understand the concerns of W Sumatra society who feared to be infected with Corona virus so as not to dispute the rejection that happened.

However, since the beginning of 13 Muslim tourists from China are very interested in praying at Masjid Raya W Sumatra, while enjoying the religious atmosphere in the place.

Today they have a chance to follow Zuhur prayer together and meet the Governor, Irwan Prayitno.

The group's arrival was facilitated by PT Marawa Corporate who worked with Cocos Tour as a travel agency.

However, the time of the visit coincided with the issue of Corona virus that spread in China so that there was rejection by some of the residents of W Sumatra who feared the virus reached the area. * 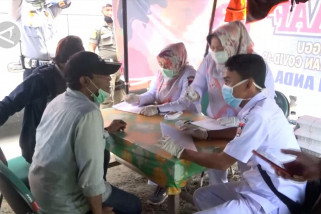