Batusangkar (ANTARA) - The government of Tanah Datar District, W Sumatra, appealed to all tourism object managers in the area not to hold celebrations of the new year eve that could potentially cause immoral acts.

Tanah Datar District Head, Irdinansya Tarmizi in Batusangkar on Thursday said that in order to maintain the security and comfort of the people in the area, the Tanah Datar Regional Coordinating Forum (Forkopimda) had issued a circular.

The letter contains notice of the closure of tourist attractions at night and close the hiking trail. The points of appeal and prohibition are addressed to heads of vertical agencies, Heads of Regional Representative Offices, District Heads and Wali Nagari in Tanah Datar District.

As for appeals and prohibitions based on the results of the Forkopimda meeting there were six points of appeal, among them namely, first, the ban on holding nightly entertainment activities in public places.

The climb of Mount Marapi and Mount Singgalang which has the potential for immoral acts at the turn of the year.

Third, it is forbidden to use firecrackers, fireworks and the like, racing and the use of non-standard exhausts that will disturb public order.

Fourth, increase self-awareness of the danger of landslides and floods. Fifth, increase community unity, do not be easily provoked by issues that will divide and harm the community and always increase neighborhood security system..

Sixth, regional guardian to announce to the whole community about the appeal.

"We request that the ban on celebrations celebrating new year's eve at these attractions and so on is strictly adhered to in order to prevent undesirable things from happening, he said. 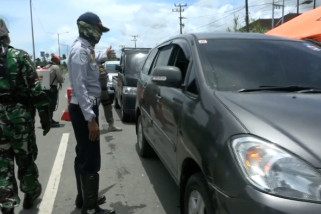