Pariaman (ANTARA) - A total of 13 villages and sub-districts in Pariaman City, W Sumatra be appointed as maritime and tourist villages by the central government together with the local government in an effort to improve the economy of residents in the area.

"This is the persistence of the City Government of Pariaman which seeks to restore the glory of the City of Pariaman," said Maritime Potential Assistant Chief of Staff Navy Mayjen. Bambang Suswanto, during his remarks, at the inauguration of the maritime village in Pariaman on Sunday.

According to him, with the existence of the maritime village, the Pariaman City Government could more easily submit a proposal for assistance to the central government.

He said this, because many ministries were incorporated into the maritime sector, ranging from the Ministry of Maritime Affairs and Fisheries, the Ministry of Public Works and Public Housing to the Ministry of Disadvantaged Villages and Transmigration.

"And also the Ministry of Energy and Mineral Resources," he said.

In addition, he continued with the formation of the maritime village, it can help the central government to make Indonesia a global maritime axis.

Meanwhile, Mayor Pariaman, Genius Umar said that by setting dozens of villages in the area as maritime villages, the development for improving the economy of local residents would also be better.

He said this was because a number of relevant ministries would focus their attention on human empowerment and physical development whose aim was to improve the economy of citizens.

He explained that the economic improvement was one of them through increased production of capture fish with the latest technology and training. 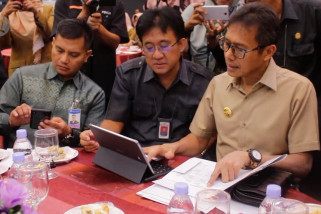